Yes, you read it right. For $10k you can get Spacex latest starlink maritime Internet for your yacht, oil rig or maritime vessel. For a common man this might seem like a funny business, but for boat owners this is a great relief.

What is Starlink Maritime Internet Services?

Starlink Maritime is no doubt meant for the wealthy few. Also as per company’s claim they are currently available in coastal regions and will eventually expand globally.

In this you get Two starlink Maritime Kits with two Antennas, with two sets of routers and other accessories.

The Starlink Maritime download speed as per company once fully functional will be : Download- upto 350 Mbps, Upload- upto 40 Mbps and less than 90 ms Latency. They have a data cap of 5 TB.

People used to terrestrial services might think that is such an outrageous price. But when you compare it to the other two marine internet services available, then starlink seems way cheaper.

Cost and Plans of Starlink Maritime

If you own a starlink rv, then the spacex maritime service charges might seem absurd to you at first glance. But if you own a yacht, merchant vessels etc then you will be happy for the starlink service.

For the Spacex Maritime Kit you need to pay a whopping $10,000 for the hardware and $5000 per month for the internet.

Moreover, there is a flexibility for you to pause and resume the services whenever you like. Like suppose you need Starlink Maritime Internet only for 15 days in a month so you can resume and pause them accordingly.

The good thing is that you will only need to pay for the time you were using the services. And not need to pay when you pause it.

Where are Starlink Maritime Services Available As Of Today 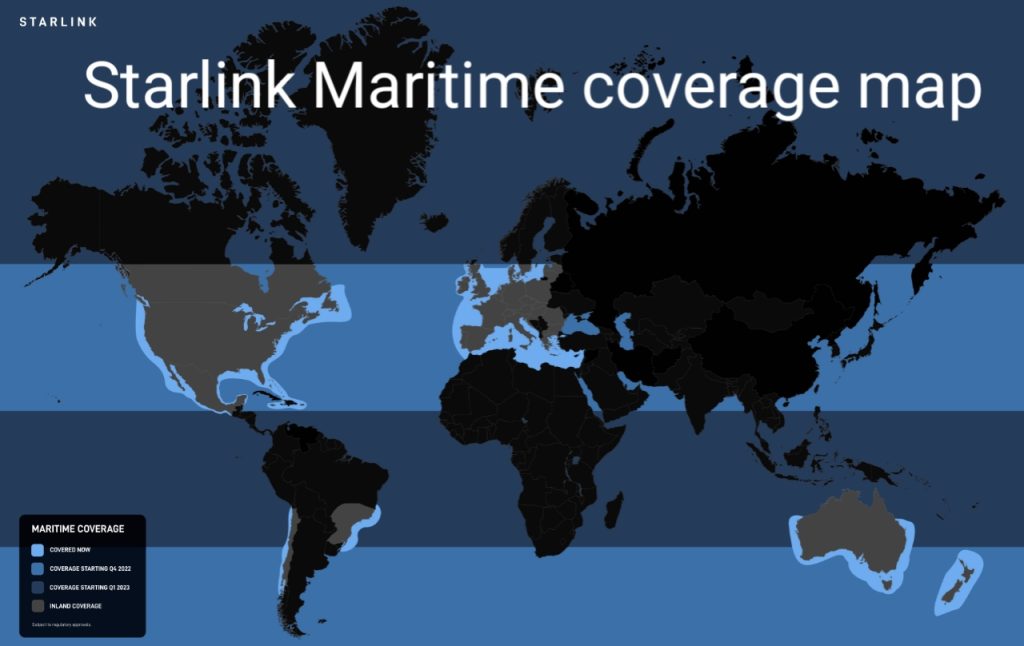 As per Official Starlink Maritime Coverage Map, their maritime internet services are available fully in coastal regions. This includes the Western and Eastern Coast of the US. Also available in Cuba and Jamaica region.

Talking about Europe, it covers the coast of the UK, France, Spain, Germany, Ireland, Portugal, Italy, Greece, Turkey, and nearby countries.

Talking about Australia, it is available near East, West and Southern Australian coasts. And then the nearby New Zealand coast is also covered.

Starlink Maritime Vs Their Counterparts

Spacex itself was earlier using VSAT services but it was costing them a huge chunk of money. So, let’s learn how Starlink’s New Constellation Train is more economical option for all. There are two more major players in the field of ocean internet. The first one is VSAT and the second is Fleet One. Lets compare the three-

Now you have all the figures in front of you, so no doubt starlink is the clear winner. With more Starlink Satellites launches to be coming up their services are only going to improve manyfold.

What you will get in Spacex Starlink Maritime Kit

Once you order Starlink Maritime Kit you get 4 boxes which include 2 Antennas and 2 pole kits. The only exception between these two sets will be that in one of the two bigger boxes you will get extra long RJ45 cable.

You can expect your delivery within 1-4 weeks depending upon your location. You can check the starlink maritime availability here. 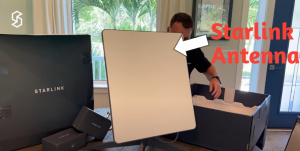 Once you unbox the bigger antennas boxed you will get a big flat dish out of it. The size of Starlink maritime antennas is 22 X 20 Inches. In each spacex Maritime kit you will get a wifi router, cover, router cable, power adapter, power cable, antenna cord and power converter. 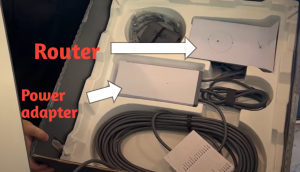 The size of the maritime wifi router is 10.25 X 5.75 inches. And its power adapter feels like a heavy brick with dimensions of 11.5 X 6.5 inches. The operating temperature of both maritime router and adapter is between -30 to 50 degree celsius. And the average power requirement is 325 watts.

Talking about the smaller pole kit boxes. In it you will get a pipe adapter to fit a 2.5 inch outdoor pole, screws and allen wrench.

So, when they were tested by turning the boat arounds in water then the antennas did not move. They kept on holding their initial position. These were tested with sharp 90 Degrees turns, slow turns, etc.

There was some drop in the speed but it maintained the connectivity throughout and gave the performance. At turns the download speed was around 50 Mbps.

These were tested upto 40 knots with 5 knot incremental speed. The results were as follows: download 97 Mbps, upload 7 Mbps and Latency 52 ms. The waves that day were around 3-4 feet.

Most of the time this won’t be an issue for users because there are open seas. Eventually you won’t find any blockage or obstruction out there. But it has been observed, when you are near a dock you might see obstruction from bridges or trees. So it performed well under them as well with not a significant drop.

Yes, Starlink maritime broadcasts two separate SSID. That means you can choose between two routers to which you need to connect at a given time. If you would like to combine them into just one simple SSID for all devices then you can use SpeedCast Sigma net product.

What should be the distance between two starlink maritime antennas?

While Installing starlink maritime two antennas the distance between the two should be around 4 meters or 14 feet.

If you enjoyed the article you can buy me a coffee here.

how much does starlink cost?

When is Next starlink Launch?

How much power does starlink use?

Is starlink available in my area? Check Here!

How to Cancel any item from Starlink Order?

How many Starlink Satellites are in the orbit?

What is Subaru Starlink? Is it a must for vehicals?

Starlink puts 1TB Data Cap Under Fair Use Policy, is it Fair?

When will I receive my starlink? How much time will it take?

Starlink In motion Internet Service for $2,500? Starlink for RV!

How fast is Starlink Internet? Is it better than Hughesnet or Viasat?

What is starlink? Everything you should know for this latest technology!